The View From Wisconsin

Just a random set of rants from a Sports Fan from Wisconsin.

As I looked at these two photos side-by-side, even I'm amazed.

The photo on the left was me, taken back in May of 2004 (and is my profile photo on here). The one on the right was taken two nights ago. Amazing how losing 60 pounds or so affects how you look. 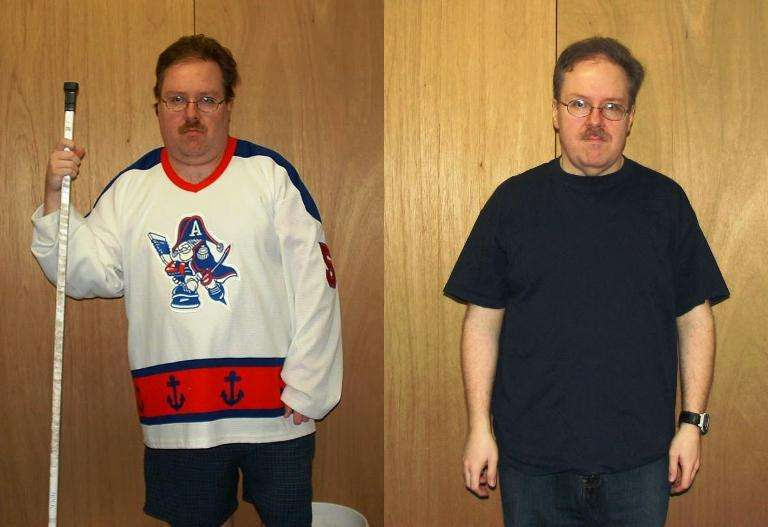 It has been a very rough week for me.

Obviously, the Predators self-destruction this week didn't help things at all. Neither did the Admirals' one-and-done" playoff run. But there's something more that's been happening, closer to home.

For those of you unaware, I work at a juvenile detention facility here in Wisconsin. It's been in operation for nearly 50 years, and in that time there's only been about three deaths of youth on grounds.

On Saturday, the 21st, there was a fourth. A youth who apparently had some heart issues collapsed in his room, and could not be resuscitated. It was not a pleasant day, to say the least. No, it was not in my place of work, but I remembered the youth from the time when he was in our cottage (living unit).

That wouldn't be so bad, if not for what happened late Sunday night. A fellow youth counselor who had worked a double-shift (first and second shift) lost control of his vehicle on the way home, and was killed when his car went off the road, flipped in a ditch and hit a tree, catching fire. His name was Todd Fraser.

Now, you may be asking why I mention his name. Well, there's a reason. For quite some time, I really didn't have many people that I could talk hockey or such with at my workplace. Those that were hockey fans were fans of other teams - the Rangers, the Devils, the Blackhawks and the Dead Things, for example. This gentleman, though, apparently had some connection with someone in Tennessee. I don't know why or how, but he would occasionally wear a bright orange UT pullover to work, and he mentioned that he was a fan of the Titans.

The best part, however, was that he was a Predators fan. Yeah, not very gung-ho, but he and I had some good conversations about the team. I actually commented to him the night after our series loss that there was definite venom in the air over Barry Trotz and wanting him fired. I actually saw him briefly on Sunday morning before I left work, since he worked at our main control area (gate house).

I'm not going to equate his death with that of Swampy, or of the beloved Eudora. But the Predators Nation has lost one of its own here - albeit tangentially.

This whole long weekend has also put something else in perspective: there are a whole lot worse things that can happen besides losing a hockey game. Maybe there's a bit too much venom on the part of us that are still around as to wanting Trotz gone.

That old Kentucky philosopher that used to wander the Nashville Predators message boards before he started playing with toy airplanes used to make an analogy about how the Preds were like his daughter. Sometimes she'd do things brilliantly, and sometimes she'd just get stuck on not being able to do this one little thing. I'm guessing that we're asking a bit much of a nine-year-old to do vector calculus.

Yes, they are our children. Yes, it hurts to see them lose. But there are many things that are worse that could be happening to you at this time.

Mourning the death of a co-worker, for one.

In my attempts at being a well-rounded sports fan, I've played around with an older stat formula for basketball called "Most Effectve Player". It essentially takes all of the good things a player can do in a game (points, rebounds, assists, steals, blocked shots), subtracts all of the "bad" things a player does (fouls, turnovers, missed field goals and free throws), multiply by 100 and divide by minutes played.

This year, Dirk Nowitzki of the Dallas Mavericks ran away with the MEP totals, with a 68.33 season average. Kevin Garnett of the Minnesota Timberwolves was second with 67.88.

Barry, You're Ready to Go.

It's time for the Nashville Predators to fire Barry Trotz.

It is officially and woefully apparent that the Predators are unable to take that next big step towards the Stanley Cup with him at the helm.

The ultimate damning event happened tonight: the Predators lost their seventh straight road game in the playoffs since 2004. You cannot, unless you win the Governor's Trophy, win the Stanley Cup without winning at least once on the road.

Nashville is likely to be golfing Saturday morning. And Barry should be out of a job by Monday morning.

If not, maybe Mr. Poile needs to consider finding a new job as well.

Major League IV: The Return of the Indians

This is so bizarre it's funny:

Because Jacobs Field has been pelted with snow over the last week or so, and the Indians have been unable to hold their opening series as a result, they have decided to take a "road trip" and play the games at the nearest available stadium that could accomodate them...

The Angels and the Indians will play their series here in Milwaukee on Tuesday, Wednesday and Thursday, bringing AL baseball back to the Brew City for the first time in a decade.

Of course, this isn't the first time the Indians have called Milwaukee "home", but that was Charlie Sheen's fictitious Indians from the first Major League film.

For those of you who are late to the conversation: I've discussed the Goals Created Formula elsewhere on this blog and on my home page. So instead of going into all the particulars, we'll just dive in.

This was a weekend of sorts where the good guys started to catch back up after falling behind. The Preds ended their regular season with a nice third-period flurry to post win number 51, and today the Brewers replied to the poundings at the hands of the Cubs with a pounding of their own.

On to other things:
Time for me to go update the spreadsheets... season's end means more to do.