The View From Wisconsin

Just a random set of rants from a Sports Fan from Wisconsin.

All point totals are using the Yahoo Fantasy Sports method of points for Football: 1 point for 20 yards rushing or receiving, or 25 yards passing; 6 points for touchdowns; -2 points for INT's or fumbles lost; 3 points for FG's from 0-39 yards, 4 for FG's from 40-49 yards, and 5 from 50+; sacks are 1 point, INT's and fumble recoveries are 2 points, and extra points are either one point (kicked) or two points (pass/rush/receiving).

QB - Drew Brees, New Orleans (293 pts.) Yanno, five thousand yards is a pretty good total for any quarterback. The problem for the Saints, though, was that despite his eight games with 100+ passer ratings, he had six games with sub-70 passer ratings. The last one knocked the Saints out of the playoff race in their 27-24 loss to Chicago - and it likely knocked a few of his owners out of the playoffs as well.
RB - DeAngelo Williams, Carolina (193 pts.) Eight straight weeks with at least one rushing touchdown (nine straight with the four-yard TD pass he caught week seven); two four-TD games in that stretch, and four straight 100-yard games.
RB - Michael Turner, Atlanta (177 pts.) He had great book-ends to a pretty decent season. 220 against Division II Detroit week one, and 208 against Division I-FCS Saint Louis week 17, and maybe only four bad games during the season - all in the first half.
WR - Larry Fitzgerald, Arizona (136 pts.) Who says he's over the hill? Thanks to the resurgence of the Redbirds and Kurt Warner, he set career bests in yards and touchdowns. And, unlike last year where he lost three fumbles, he only put the ball on the ground once - and didn't lose it.
WR - Calvin Johnson, Detroit (130 pts.) A bright spot in a very dismal year for the Lions. They had to throw from the start, since they were usually down by a few touchdowns very early in most games. 1,331 yards and 12 touchdown catches is great on a horrid team - though two fumbles lost hurt.
WR - Andre Johnson, Houston (118 pts.) He had that monster 207-yard game against Tennessee, but he generally had hot-and-cold days for the Texans. Still, his 1,575 yards was a career best, and 8 TD's receiving matched his 2007 mark. He could be a big fantasy pickup next year - especially if he stays healthy.
TE - Tony Gonzalez, Kansas City (103 pts.) Yawn. 1,058 yards and 10 TD's, what else is new? Gonzalez actually broke double-digits in TD's for the first time since 2003, though his yardage total was down slightly from 2007. Still, his fourth 1,000 yard receiving season - as a Tight End, no less.
K - Stephen Gostkowski, New England (159 pts.) He had points in each of the Pats' games; he was a perfect 40-for-40 in PAT's (he hasn't missed a regular season PAT since December 31, 2006); and he was 10-for-12 in FG attempts from 40 or more yards.
DEF - Baltimore Ravens (196 pts.) The best point-getter that wasn't a quarterback in 2008; they benefited from six defensive TD's and 26 INT's to reach the mark of "best fantasy defense". They may need that in their Wild Card game this weekend against the Dolphins.

A Trunk For Christmas

It's just an old trunk, right?

Not quite. Look closer. 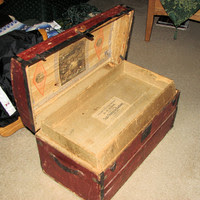 Yes, it's an antique valise trunk, complete with a "storage tray".

Ah, but that's not the reason why my Aunt and cousin got me this particular "old trunk" for Christmas:

Yep. It's one of Uncle Secor's trunks, made in Racine.

Where I've Been in the USA

A little toy I got at BigHugeLabs (the home of the Motivational Poster Generator): 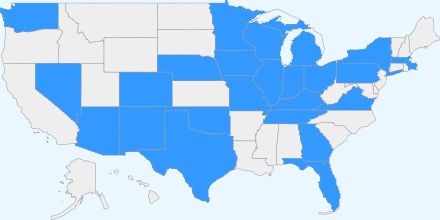 It's that time again: Time to rate which Bowl games are best (and worst) for this year's run to the mythical BCS Championship Game.

Rankings are based on two factors: the combined BCS Rating of both teams (Strength) and the difference between the BCS Ratings of both teams (Spread). BCS Rating is used with the same basic formula as the actual rankings, but with the rankings extended to all Division I-BCS teams.

The average Division I-BCS team has a rating of .23718; Clemson is closest to that mark with a rating of .23889, good for 36th overall. This is a major drawback to the rankings, as teams that are not ranked in the two human polls suffer by over-reliance on the computer rankings.

To derive a particular Bowl's Quality Rating, the combined BCS Ratings for each game is averaged out (.72120), as is the average difference between the two teams' BCS Ratings (.09668). Then, the combined Strength rating for the game is divided by the average, and multiplied by 100. The Spread between the two teams is similarly divided by the average and multiplied by 100. Then, the Strength percentage is reduced by the Spread percentage to produce the Bowl's Quality Rating.

The "average" Bowl game would rank at exactly 0; Bowl Games ranked 100 or better tend to be the best games, while games ranked -100 or worse tend to be stinkers.

I have a new t-shirt. Not another Admirals shirt, nor a Predators or Brewers or Packers shirt.

It simply says on it, "Buried."

Because I did something tonight that I should have done three decades ago.

"We were therefore buried with him through baptism into death in order that, just as Christ was raised from the dead through the glory of the Father, we too may live a new life." (NIV)